Angry Wife Catches Her Husband And His Mistress Together In Bed. Photos - Mc Ebisco 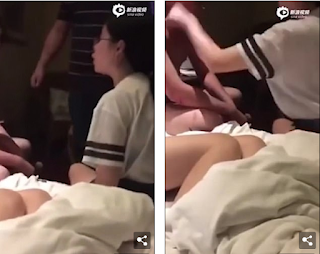 A scorned wife confronted her unfaithful husband and his suspected mistress after catching them red-handed in China. The wife is said to have caught the man in bed with his lover at a hotel when the altercation took place.

The woman questioned her husband why he cheated on her after six years of marriage. She then slapped him in the face while his alleged mistress was lying next to him in a night gown.

In the video on Sina.com, the furious, bespectacled wife also yelled: ‘How dare you.’ She then said: ‘How well do I treat you? You know it.’

It seems that the wife had gone to catch the lovers with a group of friends, who indicated in the video that there were money disputes between the couple.

At one point, the husband went up to beat one of his wife’s friends who shouted at him ‘you have been using her money until today’. The two men got into a fight in one corner of the room.

Soon after, the wife grabbed the alleged mistress by her arm and the latter begged ‘can we talk calmly’.

The alleged mistress then claimed the man had not told her about his marital status when they first started a romantic relationship.

When one of the wife’s friends scolded her: ‘What about after you found out?’ The alleged mistress remained quiet.