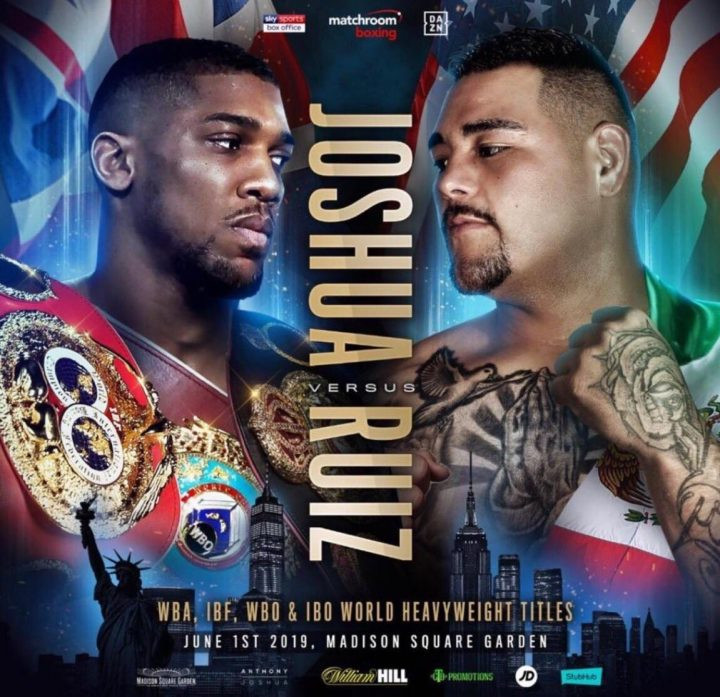 British-Nigerian heavyweight champion, Anthony Joshua‘s US debut will still happen as a new replacement has been confirmed.
The 29-year-old will now face Andrés Ponce Ruiz Jr, an American professional boxer and defend his WBA, IBF, WBO, and IBO titles on June 1 at New York’s Madison Square Garden.
Ruiz, 29, replaces Jarrell ‘Big Baby’ Miller, who was forced to withdraw from the bout for failing a drugs test. He will go into the fight with Anthony Joshua hoping to become the first fighter from his country to become world heavyweight champion.
He says: ‘I’m really excited for this fight. There’s nervousness in me, but they’re happy nerves. The chills. This is my chance to make history, I want to be one of those greats like Chavez, Tyson, Holyfield, Lennox Lewis. I want to be in that category. Thanks to God for everything that he put in me, I just can’t wait.
‘I think the fight is going to be toe-to-toe, two guys smashing each other’s faces. I’m going in there to throw combinations like I’ve never done before and with more speed than ever. A lot of people underestimated me. I’m used to that. My whole life people underrated me so I’m just going in there to take it all. I’m not going in there scared and I’m not going in there nervous, I’m going to go in there mad to take what I believe is mine.’
This is his withering assessment of Joshua: ‘I think being so tall he fights like a big robot. He hasn’t fought anyone with my style, my speed, my movement. It’s going to be a whole different ball game. All the guys he’s fought, they usually run from him. I don’t think he’s good going back. I’m going to bring the pressure, the speed, and the combinations to him.
‘When I do pull out this win, everything is going to change. I’m going to bring the titles back to Mexico, it’s going to mean everything. I’m going to be able to change my whole family’s lives; my life and all my kids. It’s a win-win situation right now but the main thing is to win the fight and make history.’
Joshua says: ‘Yes, Ruiz is a different kind of challenge but one I embrace. We have worked in the boxing gym week on week and whoever was going to be put in front of me at Madison Square Garden was going to be dispatched in style. The rent will be collected.’
Subscribe To Mc Ebisco