Argentina Must Bounce Back After Defeat To Colombia – Messi 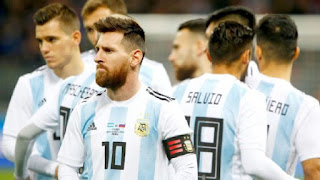 Lionel Messi has said there is no time for Argentina to complain after their shock 2-0 loss to Colombia to open their 2019 Copa America campaign in Brazil.
After a dour first half Argentina went down after the break to two well taken goals by Colombia.
Roger Martinez opened the scoring with an unstoppable drive in the 72nd minute before substitute Duvan Zapata finished off a good team move with four minutes of the game remaining.

Despite the reverse, the Barcelona star believes there is time for his country to turn it around.
“There are positives to come out of this, we are ready to accept the challenge that we have,” Messi said after the game.
“There is no time to complain, we have to look ahead, we have to raise our heads and continue, there’s still a lot of the tournament left.
“They kept the ball well, but didn’t create clear opportunities, but when we took a step forwards in the second half they scored a goal.
“When we were playing at our best, they scored a great goal and it cost us.”
lionel-messi-argentina-la-albiceleste-copa-america-colombia-barcelona
Messi said that his team will learn from the defeat, their first in regular time in the competition since going down to Brazil in 2007.
“We’ll take it as a lesson for the upcoming games. We continue to depend on ourselves,” Messi added.
“It’s not easy to start with a loss, but if we beat Paraguay, we go back to a comfortable situation.”
The Albiceleste’s game against Paraguay is on Wednesday June 19, and they will round off their Group B campaign with a match against Copa America invitees Qatar.
Messi has seen his country advance to the final in the last two editions of the tournament. In each match they were defeated by Chile on penalties.
Head coach Lionel Scaloni was angry at the state of the pitch in the Fonte Nova Arena in Salvador.
“I found the state of the pitch regrettable, it was the first match there, I don’t want to imagine what will happen from here onwards,” he said.
“It leaves a lot to be desired for these players to play there.”
The stadium is scheduled to host four more games in the tournament, including a quarter-final that may feature Argentina if they go through as the best third-places team from Group A or B.

Philippine Government To Offer Jobs At Home For Returning Filipinos

The 25 Players With The Most Assists Since 2000

New Ankara Gowns For Ladies With African Attire In 2020

Ntsiki Does Not Want Marriage And Kids. Her Reason Will Shock You

Meet The Every Year Young Beautiful Wife Of Kanu Nwankwo

JUST IN: Kanye West Announces That He Is Running For President Of This US

“I Haven’t Been Kissed In So Long, I’m A Virgin Again” – Rapper Eva Alordiah

Why Do Ladies Have To Dress In This Manner Just To Attract Men?

Pastor Arrested For Running A Baby Factory Inside Church And Using Drug Addicts To Get Victims Pregnant.