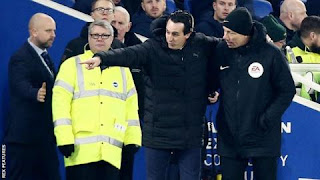 Arsenal boss Unai Emery has been fined £8,000 after accepting an FA charge of improper conduct after kicking a bottle which hit a Brighton fan on Boxing Day.

Emery apologised to the fan immediately after the incident, which was not mentioned in the referee’s match report, and once again at full time in their 1-1 draw at the Amex Stadium.

Speaking after the incident, the Spaniard said: “I said to them I’m sorry.

“It wasn’t hard but it touched one supporter.

“I kicked the bottle in frustration but not at the supporters, not with this intention. It’s circumstances. I apologised. I hope it’s the end of the matter, yes.”

Amazing Gorgeous Aso-Ebi Styles You Can Rock In 2020

My Husband Has Never Kissed Me, I Just Discovered He Has Been Lying About His Reason And I Am Hurt

Fatal Accident!!! One Dead, Another In Critical Condition After Motor Accident At Circle

A Boy Who Went Missing At The Age Of 2, Found 18 Years Later (See Photos)

I R@pe Women During Operations. Please Kill Me Instead Of Wasting My Life By Taking Me To Prison

All Schools to Reopen In Stages Starting 15 July 2020

How Fashion Designers Are Making African Print Go Viral In 2020

Did You Know About Wizkid’s Boutique In The UK? Check Out Photos

Asoebi Styles: Nigeria Styles With Lace You Will Love To See In 2020

JUST IN: Court Rules On Bail Application By Wadume

How I Will Lift 100 Million Nigerians Out Of Poverty – Buhari

Latest Ankara Short Dresses That Will Steal Your Heart In 2020

Shocking WhatsApp Chat Between Lady And Her Brother………

When To Say I Love You For The First Time, According To Men

So Painful: 22-Year-old Beautiful Girl Dies After Posting On Facebook “If I Die During Lockdown No Need For Autopsy” (See Photos)