Asiwaju Tinubu meets with loyalists, maps out strategies on how to beat PDP - Mc Ebisco
Menu 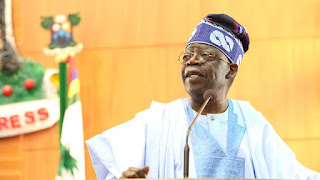 National Leader of the All Progressives Congress (APC), Asiwaju Bola Tinubu, has hit the ground running following his appointment as co-chairman of the All Progressives Congress (APC) Presidential Campaign Council (PCC).
Tinubu, a former governor of Lagos State, has met with members of his political family, who are members of the PCC to strategize on task before the committee. Tinubu was named as co-chairman of the committee announced on December 28, 2018, and which has President Muhammadu Buhari as chairman.
Among his associates on the list are Vice President Yemi Osinbajo; former Interim National chairman of APC, Chief Bisi Akande; former governor of Lagos State and current Minister of Works, Power and Housing, Babatunde Fashola; former deputy governor of Lagos State, Adejoke Orelope-Adefulire and a former speaker of the Lagos State House of Assembly, Senator Olorunnibe Mamora.
Others are Majority Leader of the House of Representatives, Hon. Femi Gbajabiamila; Senior Special Adviser to the President on Foreign Affairs and chairman, Diaspora Commission, Hon. Abike Dabiri-Erewa; a former Commissioner for Information and Strategy in Lagos State, Dele Alake; former Commissioner for Finance in Lagos State, Wale Edun and Alliance for Democracy (AD) gubernatorial candidate in the 2016 governorship election in Ondo State, Chief Olusola Oke (SAN).
Osinbajo, who served as Commissioner for Justice and Attorney General in Tinubu’s government, is the deputy chairman of the PCC, while Akande, a former governor of Osun State is a member of the council.
The House leader, Gbajabiamila, was appointed as a member of the Special Advisory Council.
Fashola, who served as Tinubu’s Chief of Staff and later succeeded him, was appointed Director, Election Planning and Monitoring, while Orelope-Adefulire is to serve as Deputy Director, South.
Dabiri-Erewa, who represented Ikorodu Federal Constituency of Lagos State in the House of Representatives between 2003 and 2015, is the Deputy Director, Strategic Communication of the campaign council, while Alake was appointed the Secretary. Oke and Edun are to serve as Zonal Director (South-West) and Director of Finance, respectively.
Other members of the PCC, who are Tinubu’s loyalists, are APC serving governors, serving senators and members of House of Representatives, zonal women leaders as well as gubernatorial candidates.