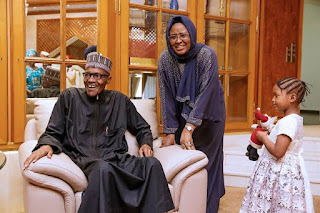 Aisha, the wife of the president, on Tuesday, December 4, urged women in Nigerian to help ensure the return of Muhammadu Buhari and the ruling All Progressives Congress (APC) administration during the 2019 election.

The Nation reports that Aisha appealed to the women when she attended the national women leadership summit organised by a political group, Project 4+4 for Buhari and Osinbajo 2019, at the National Women Development Center, Abuja.

The report quoted a statement by Aisha’s director of information, Suleiman Haruna, as saying the wife of the president observed that during the last election, women participated fully in the voting process and ensured that the APC was elected.

She said this was the reason the administration of President Muhammadu Buhari initiated the social investment programmes targeted at the women and their children in order to engage them and reduce the level of poverty among them.

Asking them to spread what she called the good news of the accomplishments of the current administration, Aisha noted that women have been at the receiving end of the struggles of men. Calling for a one-minute silence in honor of all soldiers that lost their lives in the process of securing the country, she urged the government to release their entitlements.

The national coordinator of Project 4+4, Comrade Garba Musa Bello, revealed that the purpose of the summit was to bring together women from 774 local government areas and chart for them a strategy for the campaign period.