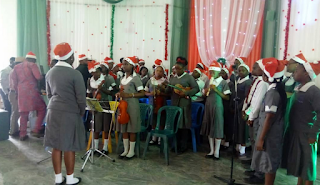 Ambrose Alli University, Ekpoma has held its annual festival of Nine Lessons and Carols ,the event was held at the Pastor Chris Oyakhilomen Auditorium .
The annual event is to usher the Ambrose Alli school community  into the Christmas season and to share in the joy of the yuletide and also to sing praises to the Almighty God and to thank him for how far, he had brought them as an institution.
The Vice Chancellor Professor I A Onimawo in his welcome address said  this is a time to count the blessings of AAU,Ekpoma and give the glory back to God.
The VC listed the numerous achievements of the University within the  three years which has repositioned the school and has improved its global ranking and digital repositioning thus making the AAU Ekpoma among the best 10 in Nigeria.
He said that the vision of AAU has been met and the school presently is rated as the best State University in Nigeria.
Professor Onimawo said the year 2018 had its own challenges, but the school  saw every challenge as an opportunity and attributes the success to prayers combined with hard work.
He further said that Ambrose Alli University is now totally different in attitude and technological operations from how it operated three years ago ,the school has one of the best E libraries in Nigeria which can be attested to by the series of panels by NUC accreditation teams.
He noted that there has been dramatic and spectacular infrastructural development in the past three years ,stating that students are now having lectures in mammoth faculty buildings as against the small office building in the past
He listed part of the phenomenal development as
*Over 5 KM of road tarred
*All facilities now have Spacious auditoria with padded chairs
*Ongoing construction of two new faculties
*Additional three large examination centres with over 1000  sitting capacity each
*Massive renovation of students hostels
*Purchase of a building at Boundary road ,GRA Benin City  for hotel services and serve as a liaison office
*Building of a large Dance studio and a Radio station
*All academic courses are dully accredited
*Creation of more academic departments
*Better welfare package for staff
*Construction of a befitting spectacular sports pavilion
Professor Onimawo concluded by saying Ambrose Alli University has been transformed ,rebranded and repositioned
The exhortation was said by Rev Dr Charles Ague  he preached about the mystery of Gods love for humanity saying the benefits of xmas is to Reconcile ,to heal ,to live in love ,peace and be truthful,also to  share in this season of love and finally to heal ourselves of hurt.  The nine scripture lessons taken from the Bible to herald the birth of Jesus Christ were read by Her Excellency Mrs Besty Obaseki, wife of the Executive Governor of Edo State ,Her Excellency Mrs Maryann Shauibu Wife of the Deputy Governor ,the SSG to Edo State Govt,Barr OOgie  ,The Hon Deputy speaker ,Hon Okonoboh,the Chief Judge of Edo State ,Justice Esohe Ikponmwen,Hon Agbale the state commissioner for Education,Chief Lawson Omokhodion the Pro Chancellor and chairman of Governing Council,Prof Jude Aghe,deputy VC and lastly Lady Dr Mrs Jane Onimawo wife of the vice chancellor.
The following choirs  performed different carols to the admiration of guest and invitees ,it was indeed a day of Glitz ,Glamor ,Fun Praises and so much love which radiated around the capacity filled auditorium
Mary the Queen Catholic Church Choir,St Andrews Anglican Church Choir,Dignity praise choir,Don Bosco Choir,JCF Acapella choir,University secondary school choir and lastly the University Primary school choir.
Here are pictures from the awesome event