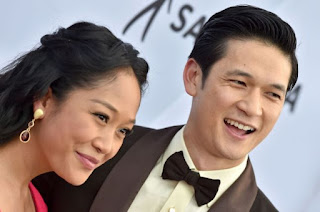 Crazy Rich Asians star Harry Shum Jr has officially become a father and welcomed his baby daughter into the world with wife Shelby Rabara.
The actor confirmed the arrival of his newborn on Thursday (28 March) by sharing a very cute black and white snap of her feet with his Instagram followers.
The picture had the lyric, ‘how wonderful life is, now you’re in the world, scrawled across it, with Harry simply writing alongside the photo: ‘Baby XIA.’
Our hearts.
Of course, the 36-year-old was inundated with congratulations from fans, with many noting that Harry and Shelby are going to be ‘amazing parents’.

The couple married in 2015 after eight years of dating and little Xia is their first child together. They had subtly confirmed news they were expecting back in November last year via social media.
Letting the picture do all the talking for him, Harry left the caption blank as he posed behind Shelby with his hands in front of her stomach while his long-time love made a surprised face.
Fans will recognise Harry from 2018 movie Crazy Rich Asians, where he starred alongside Gemma Chan, Awkwafina, Henry Golding and Constance Wu, as well as Glee.
He recently confirmed that he’ll next be starring in Heart of Life – an ABC drama pilot based on a John Mayer song of the same name – alongside Katie Findlay.