Despicable : Mother arrested for selling her baby for N600,000 to buy a phone and wrapper in Imo State - Mc Ebisco 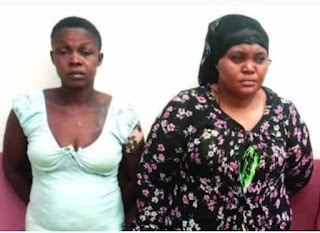 The Special Anti-Robbery Squad of the Imo State Police Command has arrested a 27-year-old single mother, Nneka Donatus, who allegedly sold her baby girl a day after putting to bed.
Also arrested were a level 12 civil servant at the state Ministry of Women Affairs, Ujunwa Udechukwu, 40; and Nneoma Onwusereaka, 37; who allegedly conspired with the single mother to sell the baby to a couple.
The mother of the baby, who spoke to Southern City News at the command headquarters in Owerri on Thursday, confessed that she used part of the proceeds to buy a phone, wrapper and slippers for herself.
She said that she was not ready to keep the baby girl having given birth to five children already. She explained that while she bought a phone, wrapper and slippers for herself, she wanted to use what remained of the money to start a business.

The woman, who spoke in her native dialect, said, “I sold my baby girl for N600,000 and used N15,000 from the money to buy a phone, wrapper and slippers and transported myself back home. I asked Nneoma Onwusereaka and her husband, who had the balance to use it to start a business for me. I have five children already and I am separated from my former husband.”

A civil servant, who was arrested in connection with the crime, said she was rewarded with N10,000 for connecting the buyer with the seller. The 40-year-old civil servant admitted that she made a mistake, adding that the N10,000 was paid into her account the following day.  A police source told our correspondent that while the single mother put to bed on March 28, the day old baby was sold for N600,000 on March 29 at Ezinachi in the Okigwe LGA of Imo State.
According to the reports, the mother of the woman who sold the baby reported the matter to SARS operatives after the lady returned home without the newborn baby.  The suspects were arrested at different locations in the state after some SARS personnel, led by their Commander, Victor Godfrey, activated the operational strategies of the unit.