Dino Melaye reacts as PDP appoints him as Campaign Spokesperson 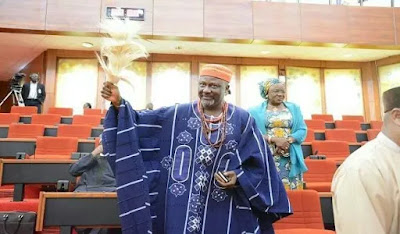 Senator Dino Melaye, representing Kogi West Senatorial district, has been appointed as the director in charge of civil societies and Non-governmental Organisations (NGOs) and campaign spokesperson of the Peoples Democratic Party (PDP).

The appointment was made by the National Executive Council of the opposition party on Thursday, November 29.

He was appointed alongside other 154-member campaign councils.

Reacting to the appointment, Melaye, on his official Twitter page expressed gratitude to the party, assuring it of victory in the forthcoming 2019 general elections.

He wrote: “Thank you PDP for my appointment as Director incharge of Civil Societies/ NGO’S and Campaign Spokesperson in the PDP Presidential Campaign. We shall usually overcome.

“Light will always rejoice over darkness. Power to the People.”

You Must Read This

See why Genevieve is trending on Social media

Burna Boy May Lose The Grammy Award and This Is Why

Kobe Bryant Dies at 41; Here Is Everything We Know About His Death

”I am the most stubborn SHEMALE in my family” – Bobrisky

My friends keep on wondering what happened to me in a SHORT time to become this rich from my businesses.

It is not easy to catch a cheating wife. WOMEN are brutally clinical when it comes to this.

Commotion as two women face each other in a city mall over a man. Cheating is real!

Husband catches cheating wife having Raw $ex with a Mpango wa Kando who had a wedding ring and films for the world to see.

I Had Suffered From Light Bleeding And Pains In My Womb, See How It Was Cured

A 20 year old girl confesses, “On that night instead my father cuddled me and touched my CLITORRIS and licked it really good”.

The day I CAUGHT my handsome husband and sister having sex on our lounge floor. This gave me a heart attack!