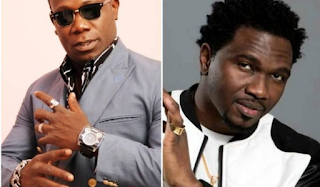 This is not the best of times for popular veteran singer, Duncan Mighty as Norwegian-based Nigerian artist, AppyDay has accused the self-acclaimed Port Harcourt first son, of swindling him of the sum of One million naira.
The Anambra state born music artist took to Twitter and Instagram to call out Duncan mighty for defrauding him of the said amount.
He revealed that the said amount was meant to be a paid charged to feature the “Jesus bu eze” crooner on his song, “She Doesn’t Care.”
Appyday also demanded for refund because Duncan Mighty breached their agreement.
He wrote, “So I contacted Duncan Mighty to feature on my new single “She Don’t Care “ formerly titled “Lauretta “. The Dude demanded 3 million naira. We later agreed on 1 million. I was supposed to pay N500,000 upfront and the balance when he is physically present for the video shoot.
“I agreed. After signing the contract, dude changed his mind and demanded 100% upfront. We finally agreed on 70% upfront and I paid N700,000 to his account. Then his manager Mr Western Momodu demanded money for flight and hotel accommodation.
“Western claimed Duncan flies Business class and his hotel room per night costs N150,000. He was demanding N380,000. I paid upfront of N300,000 to Western for hotel and flight. And then the drama started.
“First he said they were already in Lagos for the shoot, and then suddenly they were in port harcourt for the elections, and then they were at the Airport heading to Lagos for my recording and video shoot, then suddenly the flight was cancelled.
“Next thing he says Duncan will record his audio in Port Harcourt and then join us in Lagos for the video shoot. Finally, Duncan did not show up at all. Not for the audio recording and not for the video.
“My lawyers have written to Duncan Mighty but he turns a deaf ear to reasoning. He must surely pay me for all the damages his arrogance has caused me.”

PAY ATTENTION: As Been Suffering From Diabetes And High Blood Pressure For Over 35 Years, And I Have Tried All Medical Means To No Avail Until I Meet Dr Mugwenu Who Cured Me Completely.

17 Romantic Sayings That Would Melt Her Heart

What Kind Of NYSC Training Is This? (See Photo)

I Will Sue Anyone Who Defames Me – Nana Aba Anamoah Warns

BREAKING: About 500,000 Persons From N-Power Program will be remove

How To Be Beautiful & How To Stand Apart And Shine

LATEST: Serie A To Resume On June 20 – Sports Minister

“I Was Hungry And Jude Was Turning Down N3.5million Shows” – Cynthia Morgan Rakes In New Video

Why People Are Scared Of Marrying From White Garment Churches

Meet The Strongest Man 77, In Nigeria Who Pulls A Car With His Neck (See Photos)