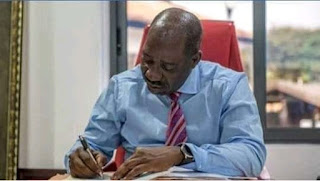 With the political polity heating up everyday in Edo State the chances of Obaseki weathering the storm brightened   with support from major political stakeholders in the State and traditional rulers .
The various support is coming from  the past national chairman of  the All Progressive Congress,John Odigie-Oyegun ,Edo North Traditional Rulers ,Edo Central Traditional rulers and a major group in the State,Edo State Professionals(ESP).

Oyegun who made the declaration in a press release accused Oshiomhole of playing god in Edo politics even though he claimed to have buried godfatherism in the state, advising him to stop disgracing the APC in Edo state through the ignoble role he is playing in fueling the crisis in Edo state.
“I am yet to come to terms why it has become difficult for Oshiomhole to realize that Governor Obaseki is the only APC governor in the entire South-south and should be allowed to concentrate in giving the people of Edo the dividend of democracy.It is shocking that a man who boastfully claimed to have buried godfatherism in Edo state politics could become enmeshed in playing God to his successor. Oshiomhole is not only guilty of godfatherism, but also guilty of anti-party activities considering the ignorable role he has been playing and his shameful involvement in the whole Edo crisis.He further stated .
In similar vein the Traditional rulers in Edo Central have passed a vote of confidence on Godwin Obaseki .,the traditional rulers in a courtesy visit to the Governor in Benin City, said the traditional rulers are happy with the choice of  Rt. Hon. Frank Okiye, an Esan man as Speaker of the Edo State House of Assembly.
The Enogie of Opoji, His Royal Highness, Ehigiamen Aidenojie who spoke on behalf of his colleagues emphasized that under the leadership of Obaseki , Esan has been getting what is rightly due to them.
Similarly the traditional rulers from Akoko Edo led by the The Imah of Somorika, His Royal Highness, Oba Sule Idaiye,earlier paid Obaseki a solidarity visit.The Traditional rulers stated that they were at the Government house to throw their support  for the programmes, policies and aspirations of Governor Godwin Obaseki.
They  thanked the governor for the good relationship between his government and the people of Akoko Edo, sating: “We can no longer say we are marginalised because of what you are doing for us as a people.
They added: “Our son is the Deputy Speaker in Edo House of Assembly and our area has been captured in your development plan.”
“We are solidly behind you and your government and by the grace of God, your second term is sure,” he said.
Not to be left out in the series of endorsement a major group of top notch corporate professionals from Edo State ,Edo State Professionals (ESP) has also thrown their weight behind the Edo State Governor and warned Adams Oshiomhole to desist from brewing rancor and disorder in the State.
The call was contained in an open letter addressed to Oshiomhole and signed by Emmanuel Ijewere, Dr. Chris Momoh, Keem Bello-Osagie, Osaro Isokpan Esq. and 31 others; they urged Oshiomhole not to bring down the house he built.
ESP suggested that the current struggle in the House of Assembly may have hidden purpose, pointing out the Henry Idahagbon led Edo Peoples’ Movement (EPM) of promoting the campaign to deny Obaseki a second term, despite the open fact in the state that the governor should continue in his excellent strides of developing the state.
The group also praised the current developmental strides in the state. “Achievement of Governor Obaseki are legion. His promise to create 200,000 jobs in his first term is being achieved. So far over 90,000 jobs have been created in both the private and public sectors. He has revamped the Edo State Traffic Management Agency to put order in road management in the state.
“He has commenced the construction of 5,000 barrels per day modular refinery in partnership with a private concern. The Gelegele Port is being linked to the Lagos Deep Sea Port to lighter cargo from there to Edo and for subsequent trucking to the Inland Regions of the South-East and Middle-Belt. He has completed the Azura Power Plant whose output is fed into the National Grid but the Transmission Company of Nigeria (TCN) is yet to efficiently perform its duties.”
The raging battle in Edo State is believed to have been instigated by the greed of some certain APC leaders who the citizens insist are hell bent on milking the state dry.