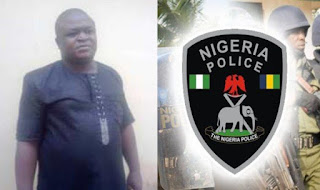 The fake prophet and doctor who has for years reportedly paraded himself as a Phd holder, was arraaigned on a two-count charge bordering of obtaining the sum of N2, 452,500 (Two Million, Four Hundred and Fifty Two Thousand, Five Hundred Naira) under under false pretence.
The suspect who pleaded not guilty to his charges, was accused of presenting himself to the petitioner on or about March 23, 2018, as a Director at the National Information Technology Development Agency, NITDA, capable of securing a job for him at Federal Civil Service Commission, FCSC.
The suspect was also accused of obtaining several funds with a promise to secure visa to Dubai and USA for the petitioner’s relatives, as well as to import a fairly used Toyota Camry from USA for him.
Eluma was however granted bail in the following terms: One surety and the sum of N2, 000,000 (Two Million Naira) in like some.

“The surety shall have a landed property within the jurisdiction of Federal High Court Enugu,” the judge held.

Justice Liman, while adjourning to February 13, 2019 ordered the defendant to be remanded in prison custody pending the perfection of his bail terms.