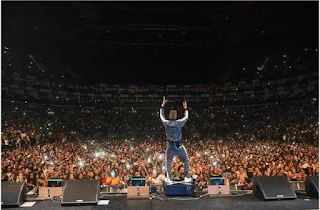 History will be kind to the likes of Ayodeji Ibrahim Balogun, popularly known as Wizkid. Many have called the Starboy a national treasure and frankly, he has earned that name for putting Nigeria on the map with his passion for music.
From the slums of Ojuelegba, Wizkid has risen to the level of a world-class star and has had his music played virtually in several corners around the world. They say music unites souls and the young man has evidently delivered tunes that will play in the hearts of millions of his fans scattered around the globe.
GROWING UP
Ayo was born on July 16, 1990 and grew up in Surulere in his family home with a Christian mother and Muslim father along with 12 female siblings. The young boy was majorly influenced by music from King Sunny Ade, Fela Kuti, and Bob Marley which he admitted to being the cushion to his heart while growing up in a polygamous home.

As an aspiring musician, he had to convince his father of his passion by making frequent visits to the studio. He got lucky when Naeto C mentored and coached him at 15 to activate his fullest potential.
IN THE BEGINNING
At age 11, Interestingly, the young boy was already shooting for the stars and made his first album with one of Nigeria’s celebrated music icons, late OJB Jezreel. The seven-track album was a collaborative one with the Glorious Five, a group he and a couple of his church friends formed. With the stage name, Lil’ Prinz, in 2006, Ayo gained the support of family and friends when he released the album in church.

Little did Ayo know his breakthrough was to activate eight years after. Thousands of Nigerians first came to know Wizkid after he was discovered by singer, Banky W in 2009. Wasting no time, he was signed on to record label Empire Mates Entertainment (E.M.E). Who much is given, much is expected, in 2010, the 19-year-old at the time, officially launched his career with the release of Hola At Your Boy, which gained him the award for Next rated at the Headies.
With the song he immediately gained the attention of many young Nigerians who fell easily for his cuteness and swag. Unrelenting, he followed it with release of his first studio album in 2001 titled Superstar. The album had major hit singles such as Tease Me/Bad Guys, Don’t Dull, Love My Baby, Pakurumo and Oluwa Lo Ni, all which rocked Nigerian charts for weeks.
SETTING THE TIDE
Having gained more confidence and acceptance, the young man went on to release a second studio album titled Ayo in September 2014. The album was loaded with hit singles such as Jaiye Jaiye, On Top Your Matter, One Question, Joy, Bombay and Show You the Money, all which sealed his place as a great artiste in the Nigerian entertainment industry.

He however didn’t stop there, in 2015, Starboy decided to tell his success story and announced his plans to release a third studio album. Although he didn’t come through, he marked his terrain as an international superstar with the release of Ojuelegba and went on to perform with the likes of Chris Brown as well as do major collaborations with big names such as Drake and Skepta.
Still on the matter, he managed to release and EP titled Sounds From The Other Side, which again reminded his fans and millions of people around the world the stuff he was really made of. In 2016, Wizkid regained his position as one of the greatest artiste from Nigeria when he featured on a song with Drake titles One Dance. The single reached number-one on the Billboard Hot 100 chart, a position it kept for 10 non-consecutive weeks.
A STAR IS BORN
In March 2013, when Wizzy baby started having issues with E.M.E over contract negotiations, things got really ugly and following the expiration of his 5-year contract with the record label, Wizkid left the and established his label imprint Starboy Entertainment.

In September 2017, the Starboy sold out Royal Albert Hall in London. The success of the that day made him vow to repeat such with the iconic 02 Arena. It was only a matter of time, in April, 2018, tickets to Afrorepublik had already sold out weeks before Wizzy took the stage.
Grand performances from the likes of Mr Eazi, Tekno, Tiwa Savage, Not3s, Yxng Bane and Maleek Berry had the crowd of 20,000 cheering and dancing in excitement before Wizkid stepped out to take the fans on a wild roller coaster of good music. Needless to say, he made history that very night.
DOLCE AND GABANNA
After the 02 Arena, people assumed the Starboy had done the greatest until he was unmasked as the first African artist to walk at one of the famed house’s shows of Dolce and Gabanna. Wizkid walked alongside world famous model, Noami Campbell. The same woman who introduced hi at his Afrorepublik show in London just few weeks prior.

According to reports, the 27-year-ols superstar is worth about N4 billion and for the Baba Nla, this is only just the beginning and fans are elated with anticipation over his soon-to-be released album he has promised them he is working on.
For anyone who ever doubted growth and progress, Wizkid has proven over the years, the true power of dreams and passion.