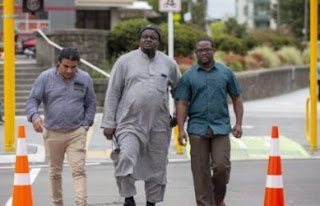 The Imam of one of the Christchurch, New Zealand mosques attacked by a terrorist on Friday is a Nigerian.
Lateef Alabi who is the Linwood mosque’s acting Imam was leading the congregation in prayers on the fateful day when terrorist Brenton Tarrant struck.
Alabi said the death toll would have been far higher at the mosque but for a worshipper, Abdul Aziz, 48, who grabbed Tarrant’s gun and forced him away from a mosque.
Aziz’s action terminated the killing spree.
Alabi said he heard a voice outside the mosque at about 1.55pm and stopped the prayer he was leading and looked out the window, the London Mail reported yesterday.
He saw a man in black military-style gear and a helmet holding a large gun and assumed it was a police officer.
Then he saw two bodies and heard the gunman yelling obscenities.
“I realised this is something else. This is a killer,” Alabi said and shouted at the congregation of more than 80 people to get down.
They hesitated only for a shot to be fired by Tarrant, shattering a window and felling a worshipper.
That what when it dawned on the congregation that they were under attack.
“Then this brother came over,” he said of the moment Aziz could no longer bear the unfolding scenario.
“He (Aziz) went after him, and he managed to overpower him, and that’s how we were saved.
“Otherwise, if he managed to come into the mosque, then we would all probably be gone.”
Also reporting on the tragedy, the Sunday State Times quoted Alabi as saying that grieving families of the mosque terrorist attack victims are anxious to be reunited with their loved ones.
“Everybody is angry, everybody is upset of course, and they want to see their dead ones and just want to pay their last respects and let them go to the grave, but the police have to complete their work and go through the normal procedure before they are released,” he said.
Alabi said the community leaders had requested the process be done as quickly as possible.
“We just request the bodies shouldn’t be too long in the mosque because the bodies are still lying over there and eventually it will be too difficult to wash the bodies and take to the burial and probably things will start deteriorating, that’s the worry.”
He and other leaders wanted the mosques re-opened with increased security.
“I’m very sad for what has happened, but I believe this country is a peaceful country and I hope something good will happen after that and the security will become tighter.”
“They just want to express the anxiety and the pain they are going through … that’s all. Our people are very good; it’s not that they are angry with the police or the work they are doing. They just want to see … just to know that … ok, my father is gone, my brother is gone … so I just want to get him beneath the ground, beneath the earth.”
No time for the release of the bodies for burial had been agreed, but Alabi said it would “probably” start from Sunday.
Alabi became emotional talking about the grieving families. “I never thought this would happen in New Zealand, never, never, never, believe me.
“But it’s happened, it’s happened, so it will happen anywhere and …. we just feel bad about those who have passed away … and for their families … I will pray for them.”
The volunteer imam said he was in the middle of prayers when he saw the gunman outside the mosque. “He shot one brother coming towards the mosque; he shot him from the head.
“I stopped my prayer, I peeked through the window, and I saw the person with a machine gun, heavily dressed. By the time I looked on the ground and saw dead bodies I thought this is something else, this is a terrorist.”
Alabi told everyone inside to “get down”, but it wasn’t until the gunman shot someone through a side window that everyone dropped to the floor.
He said the gunman ran out of bullets and dropped his gun. A man inside the mosque followed the shooter as he left the mosque. He picked up the machine gun and smashed it into the gunman’s car windscreen. After the gunman ran away, Alabi returned to the mosque.
“I started picking up the bodies to know who was dead and who was alive.”
Alabi said he had never expected to experience a terrorist attack in New Zealand.
“I’m very sad for what has happened, but I believe this country is a peaceful country and I hope something good will happen after that and the security will become tighter.”
It would take some time and lots of reassurance before many members would feel safe to return to the mosques.
“Probably even going to the mosque will be hard for members unless some serious security is provided.”
“I believe New Zealand will do it. The PM has promised it, and she will do it,” he said.
Aziz, the man who stood up to the terrorist is being hailed a hero for preventing more deaths at the Linwood mosque, although he says he is not one.
He thinks it is what anyone would have done.
At least 49 people were killed after Tarrant allegedly attacked two mosques in the deadliest mass shooting in New Zealand since 1983.