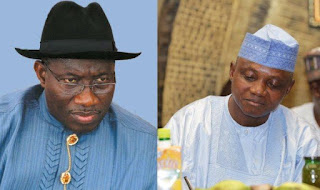 Goodluck Jonathan has replied Garba Shehu, who earlier today claimed that the former President is to be blamed over Buhari’s failure to appoint ministers on time.

We reported that Garba Shehu who appeared on a Channel’s TV show, said the refusal of Jonathan’s government to cooperate with the transition committee had a negative effect on the current administration. Frank Shuaibu, special adviser on public communications to Atiku Abubakar, presidential candidate of the Peoples Democratic Party (PDP), who also featured on the programme, had listed Buhari’s delay in appointing his cabinet as one of the factors that plunged the economy into a recession.
Goodluck Jonathan who replied Garba Shehu in a statement titled ‘Garba Shehu’s gaffe on Jonathan’s Handover notes to Buhari’  and released on his behalf by his media aide, Ikechukwu Eze, said that anyone who uses handover notes to justify a President’s indiscretion of not appointing ministers until after spending six months in power, is either being mischievous or does not really understand governance processes.
According to the former President, ‘those who think like Shehu that a Government would not function properly if it does not receive handover notes in time, should be reminded that there is no law establishing the process. It is simply a matter of convenience for an outgoing President to develop handover notes to guide his successor understand key issues and hit the ground running.’
The statement reads in full;

Our attention has been drawn to a statement by the Senior Special Assistant to the President on Media and Publicity, Mallam Garba Shehu in which he blamed the failure of President Muhammadu Buhari to appoint ministers until six months after taking over office on the administration of former President Dr. Goodluck Jonathan.
Speaking on a Channels television programme on Monday December 17, Shehu had claimed that it took President buhari who was sworn in on May 29, 2015 until November 11, 2015 to appoint his ministers because the “President was given handover notes 48 hours to the handover of power”. As strange as that particular assertion may sound, it still beggars belief that a spokesman of a President who is seeking re-election would still be looking for a scapegoat for the administration’s failure, at a time he should be showcasing his scorecard. That amounts to merely clutching at straws.
One thing is as clear as daylight: The Jonathan administration has absolutely nothing to do with the failure of this government to appoint ministers early enough to inspire confidence in investors because it is obvious that handover notes from a predecessor does not contain the list of ministers for the incoming administration. However, that is even making light of Garba Shehu’s unending embarrassing gaffe. It is expected that a man who has been around the corridors of power for that long, beginning from when he served as a media adviser under President Obasanjo for years, should understand Government’s basic functions and procedures. Handover notes, being transitioning documents, are usually received by an incoming President from his predecessor at the time of change of government.
It is not a document that guides a President to appoint his ministers. Under normal circumstances, a newly inaugurated President needs the support of his ministers, who would handle different departments of Government, to study and understand his handover notes for effective performance of his initial duties. Those who think like Shehu that a Government would not function properly if it does not receive handover notes in time, should be reminded that there is no law establishing the process. It is simply a matter of convenience for an outgoing President to develop handover notes to guide his successor understand key issues and hit the ground running.
In his own case, former president Jonathan magnanimously set up a transition team that produced the handover document which President Buhari received ahead of his inauguration. Anyone who uses handover notes to justify a President’s indiscretion of not appointing ministers until after spending six months in power, is either being mischievous or does not really understand governance processes.
Sometimes, when Mr. Shehu speaks, he comes across as someone who is unaware of the fact that, under our laws, an administration is elected for a tenure of four years within which it is expected to have fulfilled its campaign promises, before returning to the electorates for a fresh mandate. In case he does not know, Shehu should be reminded that blaming others for one’s failures is not a prove of performance. Assuming, without out conceding, that the last administration was as bad as they want Nigerians to believe, is it not a fact of governance that it is the duty of every responsible administration to seek to make better the situation it met on ground? Anything less than that is a prove of incompetence for which a failed administration has no moral justification to ask for a fresh mandate.
While members of the current administration continue to blame President Jonathan for their failure to deliver on their mandate, they should be reminded that there are many African success stories that proved that a progress-minded administration has no business focusing only on the past. From a past of the worst genocide in recent history, Rwandan President Paul Kagame did not blame anybody when he took charge. He simply hit the ground running, and today, we all know where Rwanda stands in Africa’s growth and development index.
The story is similar in Cote d’Ivoire where President Alassane Ouattara was able to turn around the Ivorian economy within two years after it had virtually collapsed following the negative impact of the country’s worst political crisis. As the Buhari Government nears its end, the minders of the administration should please tell Nigerians what new projects, programmes and institutions for good governance they have added to those established by the various administrations of the Peoples Democratic Party (PDP), since they took office on May 29, 2015. The truth is that this unhelpful blame game must stop if we have to move forward as a nation.

SCAMMED! My Husband Told Me He Is 38 Years, After Our Wedding I Found Out He Is 50 – Lady Laments

My Wife Behaves Like A Prostitute, She Has Slept With Every Single Landlord We Ever Had – Man Laments

MUST READ: 8 Signs You Are Being Emotionally Manipulated

Why You Should Avoid These Two Sleeping Positions.

Every Woman Should Know This; Every Man Is A Potential R@pist Until He Passes This Test

How To Make A Man Misses You

Pastor Reportedly Commits Suicide After Wife Cheated On Him

RB Leipzig already have their replacement for Chelsea-bound Timo Werner

Must Read: 5 Ways To Know If A Man Is A Virgin