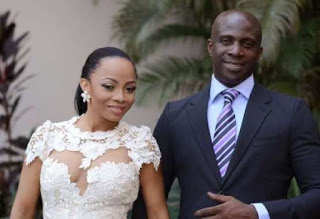 Toke Makinwa, a Nigerian author and on-air-personality, says her ex-husband, Maje Ayida didn’t waste 13 years of her life.
Answering a question from a fan on Instagram who told her to stop feeling strong, despite her ex-hubby wasting her time, Toke insisted that her estranged hubby missed out on the rest of her life.
This has sparked various reactions from her fans on Instagram.
@LaiAjanaku wrote: Pick up the mic and say W-A-S-T-E then drop it again sis.
@Ify: Isn’t she a feminist?
@Segs:Hey ooo, feminist saying we die here with a guy,feminist don’t practice what they preach again
@Mfon: The advice DONT MESS WITH A WOMAN IS GOLDEN. Look how hard it is for SOME women to forgive their ex lover!! Now imagine you are a stranger and you hurt them?
@Laide: Sis is pained asf😁😂🤣 Maje is still happily married. How about you aunty? Still roaming around Nigeria
Recall that Toke Makinwa got married to Maje in 2014. Their marriage hit the rock in 2017. Toke had on March 9, 2016, asked the court to dissolve the marriage on the grounds that the husband committed adultery.
Justice Morenike Obadina, while delivering judgment held that Ayida filed an answer to the petition but did not give oral evidence in support of it.

Must Read: “I Gave Another Man’s Child To My Husband” – True Confession

12 Types Of People That Will Never Be Successful In Life

10 Slang Only A Nigerian Can Understand

Nnamdi Kanu, Wole Soyinka Team Up To Divulge The Secret Of The Masked President Buhari in Aso Rock

I Was R@ped – BBNaija Star, Khafi Cries Out

Buhari Sitting On A Chair Inside Mosque: This Is What It Means

El-Rufai Opens Up On Fake Covid-19 Case Across Nigeria

No Fixed Date For Reopening Of Schools, Says Federal Government

OMG!!! Something Is Wrong About This Picture Of President Buhari Has He Attends Juma’at Prayers

We Are Rolling Out 100,000 Vigilantes Across Nigeria And We Don’t Need Permission To Occupy Any Land

I Don’t Need Second Term, I’m Ready To Return To US or Saudi Arabia To Enjoy My Life After 1st Term, Says Nasarawa Governor

Uwa’s Assault Was A Set Up – See Reason Why

SHOCKER: 29-Year-Old Pregnant Woman Found Dead In The Pool Of Her Own Blood In Oyo (See Photo)