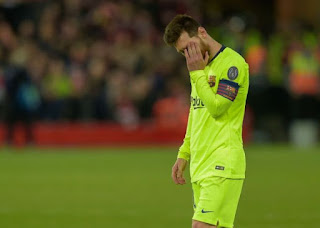 Argentine superstar, Lionel Messi reportedly broke down in tears after his dream of winning the Champions League for a fifth time with Barcelona was wrecked by Liverpool.
According to reports, Messi, who had made it his mission to win ‘that trophy’ was inconsolable in the Barcelona dressing room following the 4-0 defeat at Anfield , after his team won the first leg 3-0 at the Camp Nou.To add to the public shame, Messi was selected to do the random drugs test by anti-doping officials and the team coach departed for Liverpool John Lennon Airport without him as a consequence.Reports in the Spanish media have also claimed that, on Messi’s arrival at the airport, he was involved in an angry confrontation with a group of Barcelona supporters over their team’s latest collapse in the Champions League.
Subscribe To Mc Ebisco