Oh Dear:Diego Maradona reportedly kicked out by his girlfriend from the same house he bought her - Mc Ebisco Skip to content

Oh Dear:Diego Maradona reportedly kicked out by his girlfriend from the same house he bought her 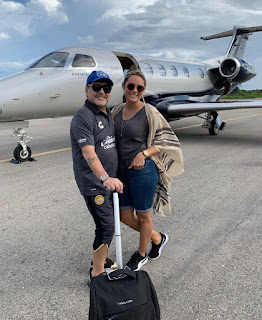 Diego Maradona is said to have split up with his young girlfriend… and she’s even booted him out of the house he bought for her.

The Argentina legend, 58, has broken up with Rocio Oliva – 30 years his junior – after series of blazing rows, claim reports in South America.

Maradona – who is currently managing in Mexico – is thought to be hurting after the split, with 28-year-old Oliva calling time on the relationship.

Pecoraro said: “The ex-footballer was thrown out of the house he gifted to Rocio in Bella Vista.

“The ex-No10 doesn’t want to leave. The relationship between them is finished.”

Oliva is said to have been kicked Maradona out of the house he bought for her in the exclusive Bella Vista area of the Argentine capital, Buenos Aires.

Recently, Oliva even described herself as single on TV show ESPN Redes, which Pecoraro says “fired Diego up”

The pair are then said to have argued at their home for a whole weekend following the stunt.

Another host of the programme said: “She doesn’t want to go to Mexico under any circumstances. She wants to stay in Argentina.”

Maradona is currently the manager of Mexican second-tier side Doradoas de Sinaloa and spends much of his time in the country.

The 58-year-old met Oliva in 2012 after divorcing he first wife Claudia Villafane in 2003 after 17 years of marriage.

Oliva is an ex-professional footballer who played for several clubs in the couple’s native Argentina.