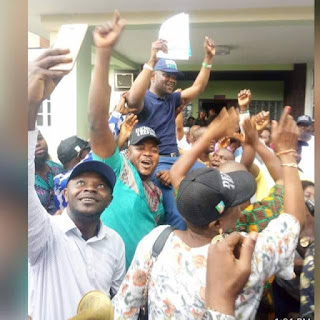 INEC has declared Mr Dennis Idahosa, the All Progressives Congress (APC) candidate for the Ovia Federal Constituency, as the winner of the election into the House of Representatives seat.

Idahosa, a former Commissioner in Edo, polled 28,509 to defeat the incumbent Ms Omosede Igbinedion, daughter of Chief Gabriel Igbinedion and younger sister to the former Governor of the state, Chief Lucky Igbinedion, who scored 23, 345 votes.

He said having polled the highest number of votes cast and certified all electoral conditions, Idahosa is returned elected as the winner of the Ovia Federal Constituency seat elections conducted on Saturday.

An elated Idahosa who dedicated the victory to God noted that it was the “voice of the people against bad representation”.

He further said that the people of the constituency clearly showed, with their votes, that the mandate to liberate the federal constituency is sacrosanct.

Idahosa stressed that never again would one single individual decide who and what becomes what in the constituency.

While promising to entrench good representation, he promised to remain magnanimous in victory.

“It is in this light that I enjoin all the good people of Ovia, both those who supported me and those who worked against me, my opponents and the APC aspirants, with whom I contested the party’s ticket, to work with me for the betterment of the constituency.

“This election was not all about Dennis Idahosa, but the people, who have yearned for a better and effective representation these past years,” he said.

A further breakdown of the result showed that the APC candidate won in 9 of the 13 wards available in Ovia North East Local Government Area.

See, If Your Man Cheats On You, Do These 6 Things To Him And He Will Change

REVEALED: Magu Has Something Secrets That Could Blow Up Nigeria, Powerful Forces Want Him Dead – Bamgbose