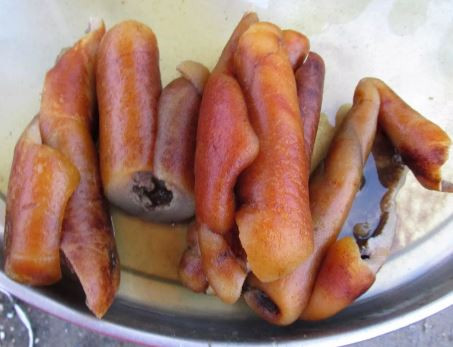 Policemen attached to the Lagos State Police Command have arrested six suspects in possession of poisonous cow skin (ponmo).The Spokesperson, Lagos State Police Command, DSP Bala Elkana said in a statement on Sunday in Lagos that the suspects were arrested following a police tip-off.“On May 5, at about 5 a.m, acting on the strength of information from a credible source that a truck load of cow skins, popularly called ‘ponmo’, suspected to be poisonous were heaped in a warehouse at No. 9, College road, Igando.“A team of Police officers led by the Divisional Police Officer Igando, mobilised to the scene.“The huge pillage and pyramid of poisonous ponmo and the chemicals used in the preservation of the cow skins were recovered.“One TATA Truck with registration number AKD-375-XB which was used in conveying the goods was impounded“Officials of Lagos State Ministry of Health were contacted and after due examination, the cow skins were confirmed to be poisonous and not fit for human consumption.“Six suspects Adelowo Yinka 50, Olawumi Onabanjo 40, Omowumi Wasiu 43, Adeshokan Taiwo 43, Iyabo Oluwa 38 and Taye Kazeem 40yrs were arrested in connection with the case.’’According to Elkana, the Commissioner of Police Lagos State Command, CP Zubairu Muazu mni assured Lagosians that the Command will continue to protect life and property of the people.Muazu also assured that the command would ensure the preservation of public health and safety as enshrined in the Constitution of the Federal Republic of Nigeria.“Investigation is ongoing to ascertain the source and destinations of those poisonous food items, and suspects will be charged to court.’’ he said.