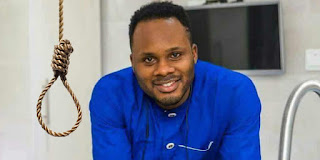 An Abuja based medical doctor who was arrested for trying to save suicide victim, Michael Arowosaiye‘s life, recounts how CCTV footage saved him.

Michael Arowosaiye who was believed to be an RCCG minister but later confirmed to have left the church 2 years ago for Shepherd House Church had reportedly hanged himself on Tuesday at Sunnyvale Estate, Lokogoma District, Abuja.
An Instagram user, Eitokpah Henri-Paul, has come up to claim that his brother, a medical doctor was saved by CCTV footage of the incident after he was detained with two onlookers who were trying to help. He posted a series of videos on Wednesday, with caption.

“My brother, a medical doctor, along with two onlookers were detained for trying to help resuscitate a young man who committed suicide yesterday. The police have him held for no reason; they named them as suspects, and asked them to write statements without any reason for detaining them.”

On getting to the victim, i noticed there was no pulse, I immediately started performing CPR (cardiopulmonary resuscitation) but to no avail.In a recent interview, the doctor, Daniel said;
There were about 10 of us that actually entered the house to rescue that guy, but most of them left when they heard that the police were coming. They were arrested after telling their story, the DPO already started addressing them as suspects.
According to him,
“God just had it that there were CCTV cameras around the house. There was one directly facing the entrance of the boys’ quarters where the guy had hanged himself. That was our saving grace.
You may recall that just yesterday, Shepherd House Church revealed plans to unveil CCTV footage detailing the suicide of the deceased.