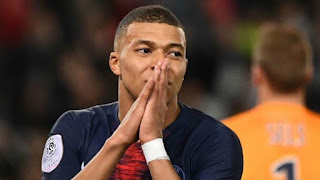 Paris Saint-Germain striker Kylian Mbappe has been handed a three-match ban after collecting a reckless red card in the Coupe de France final.
The 20-year-old forward was dismissed in extra-time of a highly-charged clash with Rennes.
A dangerous challenge on Damien Da Silva saw Mbappe given his marching orders after he caught his opponent on the knee with his studs showing and was immediately ushered from the field.
Mbappe must now pay the price for that rush of blood.
PSG still have four Ligue 1 fixtures to take in this season, with another domestic title already wrapped up.
It does, however, remain to be seen if Mbappe will figure again for Thomas Tuchel’s side this term.
Having been forced out of the club’s next three fixtures, he will be unavailable for games against Nice, Angers and Dijon before PSG wrap up their campaign away at Reims on May 25.
A statement released by the French Football Federation (FFF) on Friday read: “Meeting on Thursday, May 2, 2019, the Federal Commission of Discipline, following the final of the Coupe de France between Stade Rennais and Paris-Saint-Germain, Saturday, April 27 at the Stade de France, sanctioned Kylian Mbappe with a three-game suspension and opened proceedings against Neymar.”
With Mbappe now aware of his sanction, a PSG team-mate is waiting to discover his fate.
Neymar was involved in an angry altercation with a supporter after the Coupe de France final.
With emotions running high on the back of a penalty shootout defeat for PSG, the Brazil international was far from happy with the attention he received en route to collect a runners-up medal.
Tuchel’s side had been two goals to the good against Rennes, but were unable to hang on to that advantage.
Mbappe was then dismissed two minutes from the end of extra-time on a forgettable evening for the capital giants.
With the World Cup winner now sidelined, he will be unable to chase down Barcelona star Lionel Messi in the race for the 2019 Golden Shoe.
As things stand, a mercurial Argentine is leading the way as Messi has 34 goals to his name in La Liga, while Mbappe has managed 30 in Ligue 1.

Meet The “Strongest Man” In Akwa Ibom Who Is 77 Years Old. See What He Did (Photos)

Woman Reveals How She Rubs Charms On Private Part, See Why

Must Read: 10 Benefits of African Locust Bean You Might Not Know (Iru, Ogiri, Dawa Dawa)

‘Why I Performed Ronaldo’s Celebration At Real Madrid’

Reasons Why Other Women Can Never Take Away My Man.

I Got A Tender With County Government Without Corrupting Anyone. This Is How!

My Wife Went To SAUDIA For A job And Got A Man There.

Mercy Johnson Takes Over The Internet With Her Postpartum Photos