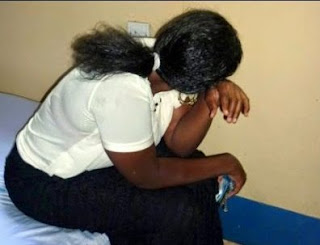 A married woman identified as Mrs. Chinyere Obi, is in serious trouble after using a cane to flog her publicly with the victim not putting up any resistance while she did so.

According to PM Express, the incident happened at Adeola Moruf Street in Ejigbo where they reside in different houses.
It was gathered that Mrs. Chinyere ambushed the lady, identified as Uzoma Eze, with cane, held her, flogged her mercilessly and injured her in the process.
While the assault, which reportedly took place in the afternoon lasted, the lady did not fight back giving reasonable suspicion that she might have offended Chinyere over an undisclosed matter. Both Mrs. Chinyere and the victim, Uzoma, were unable to state the cause of the assault aside Chinyere just claiming that the lady, Uzoma, had offended her and she wanted to revenge but failed to state how she did so.

It actually took the intervention of their neighbours who contacted police for the victim, Uzoma, to be rescued. Mrs. Chinyere was then arrested and taken to the Ejigbo Police Division.
The residents were said to have expressed surprise over what would have made Chinyere to carry out such action on the lady. Some tried to link it probably with an illicit relationship between Chinyere’s husband and the victim, Uzoma.
However, the police found the action of Mrs. Chinyere culpable and charged her before the Ejigbo Magistrates Court for assault on the victim.
She pleaded not guilty.
The prosecutor, Inspector G. Simon, asked the Court for a date for hearing so that the police will prove the case against Chinyere.
Thus, the Presiding Magistrate, L.K.J Layeni, granted her bail in the sum of N50,000 with one surety in like sum.
The defendant, Mrs. Chinyere, was remanded in prison custody pending when she will perfect her bail conditions.
The matter was adjourned till 10th June, 2019