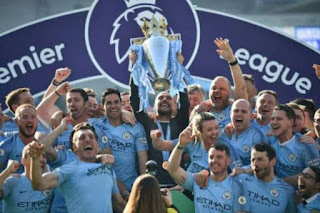 Manchester City are on the brink of an unprecedented domestic treble. No team has ever won the league, the League Cup and the FA Cup in the same season.
The Premier League and EFL Cup are both in the bag for Pep Guardiola’s side, with just Watford standing in their way in the FA Cup.
We take a look at their Premier League counterparts who have completed unique seasons to earn their places in history.
Before Ole was at the wheel, he was but a humble super-sub, steering home the late goal against Bayern Munich in the Champions League final. That goal, clinched an incredible treble for Manchester United.
That 1998/99 season remains the greatest in the club’s decorated history as they clinched the Premier League and FA Cup ahead of the Champions League final.
Alex Ferguson’s side lost just three games in the league, completing a tremendous effort to see Arsenal off by a single point.
That same opposition were vanquished in the FA Cup semi-final in a game that saw Ryan Giggs show everyone his talent. United would go on to see off Newcastle in the final.
On top of it all, they conquered in the Camp Nou in the most dramatic fashion and are the only English team to ever win this particular treble.
Liverpool completed a treble of their own, though it was a bit different, in 2001.
The Reds kicked things off with the League Cup, beating Birmingham City in the first domestic cup final to be contested outside of England.
They returned to Cardiff in May continuing their quest for a treble and tasted more success when Michael Owen scored two late goals to snatch the FA Cup from Arsenal’s grasp.
After winning on ‘foreign’ soil in Wales twice, they travelled to for the Uefa Cup final. They met Alavés there and played our a 5-4 thriller, winning courtesy of a a golden own goal from Delfí Geli.
Truly, a golden end to a silver season.
The Invincibles. Arsenal had no equal in the Premier League in 2003/04, winning the league by 11 points and dropping just 24 en route to the championship.
Most famously, they went unbeaten. The only team in modern times in English football to win the title without losing a single match.
Their undefeated season was part of an overall 49-game run in which nobody could lay a glove on Arsène Wenger’s men, who not only got results but did it in style too.
They were awarded a golden replica of the Premier League trophy as a reward.

Must Read: “I Gave Another Man’s Child To My Husband” – True Confession

12 Types Of People That Will Never Be Successful In Life

10 Slang Only A Nigerian Can Understand

Nnamdi Kanu, Wole Soyinka Team Up To Divulge The Secret Of The Masked President Buhari in Aso Rock

I Was R@ped – BBNaija Star, Khafi Cries Out

Buhari Sitting On A Chair Inside Mosque: This Is What It Means

El-Rufai Opens Up On Fake Covid-19 Case Across Nigeria

No Fixed Date For Reopening Of Schools, Says Federal Government

OMG!!! Something Is Wrong About This Picture Of President Buhari Has He Attends Juma’at Prayers

We Are Rolling Out 100,000 Vigilantes Across Nigeria And We Don’t Need Permission To Occupy Any Land

I Don’t Need Second Term, I’m Ready To Return To US or Saudi Arabia To Enjoy My Life After 1st Term, Says Nasarawa Governor

Uwa’s Assault Was A Set Up – See Reason Why

SHOCKER: 29-Year-Old Pregnant Woman Found Dead In The Pool Of Her Own Blood In Oyo (See Photo)