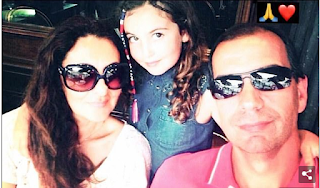 A British mum faces being jailed in Dubai over a disparaging Facebook post she made two years ago about her ex-husband’s new wife. Laleh Sharavesh was arrested along with her 14-year-old daughter Paris when she arrived in the Arab kingdom for her ex’s funeral last month.

She discovered her ex-husband’s second wife had complained about the social media post from 2016 and Laleh was held under Dubai’s strict cyber crime laws.

While her 14-year-old daughter was allowed to return home to Britain, Laleh, 55, has been banned from leaving the country as her passport has been confiscated.

Lawyers have told the single mum she faces up to two years in jail and a fine of £50,000 when she appears in court later this week.

Laleh told Mail Online: ‘I am terrified. I can’t sleep or eat. I have gone down two dress sizes because of the stress.
‘And my daughter cries herself to sleep every night. We are so close, especially since her father left us and we only have each other. It breaks my heart to be kept apart from her’.

Her ordeal began on March 14 when Laleh and her daughter flew to Dubai’s for her ex husband Pedro’s funeral.

He died aged 51 from a heart attack on March 3 and Laleh and her daughter, from Richmond upon Thames, Surrey, wanted to pay their final respects.
Two years earlier after the Portugese banker had left her after 18 years of marriage for a younger woman she lashed out in anger on his Facebook page when she saw a photo of his new wife on their wedding day.

Laleh said she wrote two comments in Farsi where she described 42-year-old Tunisian born Samah al Hammadi as a ‘horse’ and called her ex an ‘idiot’.

As she made the Facebook post while living in the UK she thought nothing more about the comments.

She was unaware al Hammadi had complained to Dubai authorities where social media posts can be used in a prosecution.