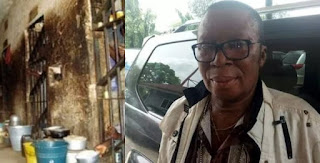 Clinton Kanu, a 57-year-old Nigerian man who spent 27 years in prison for an offence he did not commit, has been released and is now calling for the reform of the judicial system in the country.
Struggling to get life solutions? Contact Mugwenu Doctors. They use herbs and strong spiritual powers to heal long term disease such as pressure, diabetes, ulcers, gonorrhea. Life Problems such as love, family problem, hardships in business. For consultation, Call: +254740637248 & Mugwenudoctors.com

According to Rivers State Television, Kanu was arrested at the age of 30, convicted of murder in 1992 and remanded in Port Harcourt Maximum Prisons.His appeal against the lower court judgement dragged on slowly, but eventually he got to the Supreme Court of Nigeria. There, he got acquitted of the murder charge on the 5th April, 2019.Now freed, what kind of compensation with the government give to Kanu?

Philippine Government To Offer Jobs At Home For Returning Filipinos

The 25 Players With The Most Assists Since 2000

New Ankara Gowns For Ladies With African Attire In 2020

Ntsiki Does Not Want Marriage And Kids. Her Reason Will Shock You

Meet The Every Year Young Beautiful Wife Of Kanu Nwankwo

JUST IN: Kanye West Announces That He Is Running For President Of This US

“I Haven’t Been Kissed In So Long, I’m A Virgin Again” – Rapper Eva Alordiah

Why Do Ladies Have To Dress In This Manner Just To Attract Men?

Pastor Arrested For Running A Baby Factory Inside Church And Using Drug Addicts To Get Victims Pregnant.